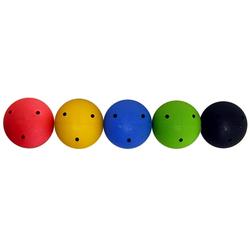 The Smarthockey Training Ball is the only off-ice training device that matches the bounce, weight, height and slide of an ice hockey puck. The Smarthockey Training Ball is recognized as the #1 off-ice training ball in the world and can be found in the locker rooms of over 22 NHL teams, 30 European National and Pro teams, 50 US Men’s and Women’s Division I College teams and numerous Major Junior teams.

Patented two-piece ball technology combines surlyn® shell with high density low rebound space-age thermoplastic core giving the training ball the exact feel of an ice hockey puck. The solid core covered by the surlyn shell eliminates any pliancy or "smushing" of the ball between the stick and the skating surface whether you’re training on a tennis court, basketball court, paved street, driveway or down in your basement.

The ball is just slightly lighter than an ice hockey puck to compensate for the extra friction of off-ice surfaces. The difference in weight makes the ball "feel" like a puck, which makes it perfect for developing lightening quick hands for puck control, shooting and passing.

The surlyn® shell rolls or slides over any surface at any temperature at the same rate that a puck slides on fresh ice without becoming pliant or "smushy" making it perfect to develop quick, soft hands necessary to become a good stick handler.